In Syracuse, New York, halfway up the hill in a quiet neighborhood of older homes, is a house much like the ones on either side. Its yard is neatly kept, and out back is a rock garden that, were it summer, would be a floral paradise. But this is November, and our objective is not flowers but rather the shrouded figure in the garage.

The “we” are myself and upstate New York enthusiast Hal DeFrees; the house, the garage and the canvas-covered car inside belong to Don Shenandoah. Under the car cover, we know, is an SS 100 Jaguar, though its outline is only loosely defined by the fabric.

Hal has seen this particular car before, and I am no stranger to the marque. However, as the car is unveiled – and that’s what it is, and unveiling, with Shenandoah on one side and DeFrees on the other, carefully rolling the cover off from front to rear – it’s still enough to take one’s breath. This is the synthesis of British design, the excuse for the silly, the mundane, the absurd shapes that the English have tried to call cars. It is so right – no, so correct. The garage is silent, save for the rustling of the car cover. There should have been applause.

That should have been enough. Yet when Shenandoah clambers through the small, cut-down doors and hits the starter button, the form comes to life. Grumbling and protesting at first, sending helter-skelter rumbles through the twin exhaust pipes to mingle with the orderly clatter of mechanical bits awakening to the November chill, the six soon warms to its task. As the throttle bores are un-choked the rumble becomes a pure note and the garage a concert hall as Shenandoah, a boy in his 70s, blips the throttle. I give DeFrees my camera bag before climbing into the passenger seat. There’s no room for it in the Jaguar, and DeFrees will follow in his Prelude. Shenandoah finds reverse and backs out under November’s flannel sky.

The SS 100 Jaguar was the first to bear the name of the cat, and in fact the first car of the firm’s own construction was simply the SS 1. The company was at the time – 1931 – the Swallow Coach Building Co. Ltd., late of building motorcycle sidecars and bodies for the chassis of various automakers, but primarily Standard. The first SS used the engine and transmission of the Standard 16, but the frame, as well as the body, was designed and built by Swallow.

The car was a sensation, but the name an enigma never explained, even when the company’s name was changed in 1935 to SS Cars Ltd. and the production of another model begun. If the previous model had been sensational, the new car was beyond description. Not only did it have those gorgeous rakehell lines, with 18-inch wheels riding under fenders rolling with the power of winter surf breaking off Widemouth and great saucers of headlamps astride an exquisite wiremesh grille. Out back there was a slab tank that spoke of places like LeMans. The spare rode there as well. There was a full windscreen ahead of the snug cockpit, but only for use with the top, which no one put up anyway. Better to fold it forward and use just the Brooklands screens and a silk scarf.

The frame, the humble undershoring so often swathed in sheet metal lest mortals view its rude contours, was exposed under the front fenders of the Jaguar, arcing with ocean-swell grace over the solid front axle. It swept rearward past the underslung live rear axle, the belly-low backbone of the car.

And under that hood, that majestic sweeping louvered bonnet, was a Standard in-line 6, but unlike the SS 1, this Standard was non-standard. The bottom end was a same, and a stout seven-main bearing unit it was, but the top in was modified extensively to increase the power. Offered in both 2.5- and 3.5-liter displacements, the Jaguar was capable of 100 mph in the larger form, it’s 125 HP pushing it past the ton. And it was cheap, yielding the performance of an Alvis or Lagonda at a price far less.

SS Cars made some 13,000 automobiles in those last four years before the war, but only 309 were 100s. It’s one of the 3.5-liters that Don Shenandoah booms now through the narrow streets of Syracuse, the tympani of exhaust following like a wake and bouncing off houses and cars to herald our arrival and make sure that no one misses our passing. Even at rest, the car parked for photos, no one can pass without stopping and looking.

I get in to drive back from the photo session, and it’s a sensation to savor. This is a car that demands intimacy. The gear lever is a left-handed reach under the dash and the steering wheel all but presses against one’s chest. It’s elbows out and leans into the turn, just to crank the wheel around. The reputation for twitchiness at speed is never encountered, as we never venture anywhere near the upper reaches of the Jaguar’s ability. At our lower velocity the Jag tracks with precision belying it solid front axle.

And thank goodness for proprioception. One never sees one’s feet, nor does the sun ever shine at the bottom of the Jaguar’s footwell. Feet must find their own way, and there isn’t much room to do it. The clutch is smooth and the brakes, cable-operated drums, are effective and well-balanced, a tribute more to Shenandoah’s knowledge and skill in setting them than to the original design.

The SS 100 Jaguar was never seriously raced in its prime, certainly not as a factory effort. Yet private entries often took the gold in rallies and trials. And a lap speed at Brooklands of just over 104 mph marked the mettle of the model.

But for us, it’s into the garage. Only with reluctance do I shut off the engine. Over coffee Shenandoah explains how he had gone to Watkins Glen to watch them race through the streets, how he had seen Dave Garroway, star of small black and white TV sets everywhere, run his SS 100, how he said, “Jeez I’d like to own a car like that.” He tells how he bought the SS 100 in 1955, sight unseen, from a minister in England, how he had it inspected over there. He tells how he got the car in New York City, how the longshoremen had banged up a fender unloading it from the ship, how he practiced driving it on the dock. He tells how it was too damn cold – didn’t we know – to put on the license plates that he had brought for the car and how he drove all through that winter night to get home, followed for some distance by a state trooper who, surmised Shenandoah, didn’t know quite what to do about the Jaguar’s English number plates.

He tells how he made the bumpers himself and also the permanent mount hand crank. He tells how the Vertex magneto had been on the car when he bought it, but he had put new S.U. carbs on it to replace the originals. He tells how Carbs he has boxes more trophies from concours and meets, more than those, with dates from the ‘50s and on into the ‘80s, crowding the shelf over the dining room table.

Listening to this man with the weathered skin and a strong hands I find that this was no ordinary pairing of man and machine, Shenandoah and the Jag. This is a story of a man in his 70s and an automobile almost 50, a match of some 30 years of steady use and care. This uncommon combination, this persevering loyalty is rare and admirable and leaves me envious. Not for the car, but for this November song relationship.

Not so, DeFrees and I hope aloud, for there’s no future in it. 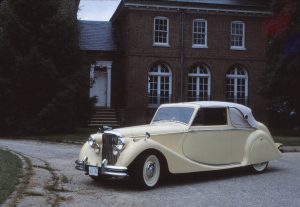 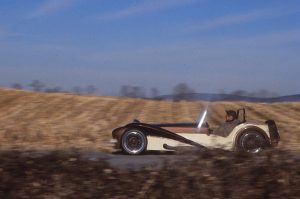 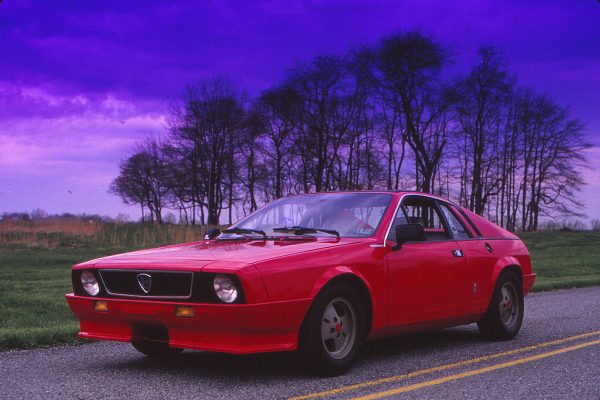