Contemporary review in CarBuzzard on December 23, 2005

We indulged ourselves one afternoon. We put the top down on a 2006 Pontiac Solstice. That’s not an unusual thing to do with a roadster, but when the temperature hasn’t yet cracked 40 it’s the kind of behavior that makes one’s neighbors regard one with suspicion. At least more suspicion than usual anyway.

One cold Pontiac Solstice It was, however, the first time that the temperature had been above freezing and probably the last as while the press fleet Pontiac Solstice graced our driveway. The sun was still out. The winter solstice was a week away and a heavy snowfall forecast for the next day. So put on the coat and hat, the leather driver-worthy gloves and turn the heater in the Pontiac Solstice to high. We’re roadsterin’. Time to be bold. Time to be cold.

The 2006 Pontiac Solstice is a bold experiment for GM, not the least for a company that has been burned on occasion for taking technological and styling risks. There was the infamous “copper cooled” Chevrolet, the Corvair, the GM rotary engine, the Chevrolet Vega’s aluminum block/iron head engine, the 1981 Cadillac 8-6-4 V-8 engine and of course, the infamous styling faux pas called the Pontiac Aztec. Once burned, they say, twice wary.
But desperate times call for desperate measures. It’s time for GM to add another sports car.

Right, by gar And by gar, they did it right. The Solstice is not perfect, but it’s bone-deep a sports car. If looks could kill, Pontiac would have had to name it Lechter. In the old days of sports cars, a rounded snout like the Solstice’s would have been protected, if that’s the word, by a thin blade bumper with the integrity of a last minute term paper or, if on a more expensive sports car, the luxury of not having to parallel park.

The hood is unblemished by cutlines because the whole assembly down to the waist pivots up from the leading edge. The trunk pivots from the trailing edge. With both hood and truck raised the Solstice looks like some predatory carnivorous waiting for a hapless sports car enthusiast…

Perky bum And the Solstice’s bum. Dare we call it perky? It is.
One sits low in a Solstice. The cowl is high and so are the window sills. The hood and especially the outward flare of the fender tops are old school visible. Driver and passenger are scrunched down in the cockpit like a pair of Soapbox Derby pilots. Makes one want to wear a snap brim cap turned ‘round back.

The cockpit flatters the driving enthusiast with a boomerang-shaped inset around the instrument panel and center stack, with controls canted slightly towards the driver. The Solstice’s tach and speedometer are set deep in chrome-ringed bezels with a little fuel gauge wedged in between. Uh, Pontiac. There’s no temperature gauge. There is, however, a much too bright high beam indicator. The blood red instrument markings are cliché or tradition: you decide. But a sports car with no coolant temperature gauge? It’s bloody not right.

Soft touch and grippy The Solstice steering wheel is soft touch and grippy. Leather need not apply. The stubby, short-throw shift lever is spot where it should be and it clicks through the gears like an old-fashioned cash register in the hands of a hall-of fame Piggly Wiggly checker.

The Pontiac Solstice seats are said to be race inspired. Perhaps, but we’re trying to determine not only which race but which species. The seatback bulges oddly in mid back, leaving the lower back and upper back unsupported. The side bolstering is good, the fabric great, but the overall comfort level matched that of the wooden straight back chair outside the principal’s office. Not that we were ever there. Really, Mom.

Pontiac says the Solstice is roomy. Maybe at the summer solstice. Not at the winter one, not with two people wearing two winter coats (one per each). Of course, the coats could be put in the trunk. They could, that is, only if the temperature is above single digits and the convertible’s flying buttresses, which connect to the top, of the convertible top are flexible and not ice caked ice or snow.

However, the Solstice’s top lowers easily enough, even if with some monkey motion and to-ing and fro-ing. It’s nothing, however, compared to the Erector Set and camel blanket combo of the early British sports car.

Those same British sports cars often had luggage racks fitted to compensate for minimal or no truck at all, enough so that in the Sixties and Seventies, carmakers put vestigial trunk-mounted luggage racks on cars with perfectly good trunks for a little faux sportiness. The Pontiac Solstice could use a real one.

The Solstice doesn’t have the soul-jarringly stiff suspension of the Brit sports cars of the Fifties and Sixties. The Pontiac is blessed with a purpose-built frame and suspension (also to be used elsewhere) rather than that adapted from a Fifties or Sixties British sedan. The Solstice chassis is rigid, letting the Solstice’s assorted underbits and its tires get the upper hand in negotiations with the road over adhesion. Add the Solstice’s near 50/50 weight balance front to rear makes track performance sweeter than a shutoff valve failure at the Godiva Chocolate factory and just as easy to enjoy. We know all that because we track-drove a Solstice from driving it closer to the equinox. The celestial one, not Chevy’s little SUV.

TR-3 engine reborn The Pontiac roadster’s clutch takeup is smooth and consistent but the brake pedal is slightly higher than would be ideal for heel-and-toeing.

The Solstice’s engine, however, is the Triumph TR-3 reborn. The Triumph’s four was gutsy and, for its time, powerful, but a real tractor motor, more bulldog than saluki. The 2.4-liter Ecotec pumps out 177 horsepower but it’s as coarse as a shipboard swearing contest. That’s peculiar because the engine in the Chevrolet HHS LT1 we drove following the Solstice impressed us as smooth. Different engine mounts? Different exhaust and intake? More sound insulation?

Whatever, we at CarBuzzard think time spent at Miss Ellie’s Finishing School would be time well spent, though no doubt some will like the hair shirt of the Solstice’s guttural engine. But then, some think German is the language of love (or else there wouldn’t be so many Germans).

Shoveling a foot of new snow off a roadster isn’t what we had hoped when we scheduled our test of the Pontiac Solstice, so it shouldn’t be a surprise to anyone that the Pontiac Solstice is more a creature of the summer solstice than the winter, at least for where the word “winter” has any real meaning. It’s still fun to drive, and rear-drive cars aren’t really paralyzed by snow. Disadvantaged, perhaps, but nothing genuine winter tires won’t help. But the lack of cargo capacity and the difficulty of getting to it can be a deal breaker. Otherwise it’s an indulgence. But we like to indulge ourselves. And we like the Pontiac Solstice.

But by not having a trunk, both of these cars were limited in how they could be used. There’s no room for a cooler or a picnic basket, there’s no room to bring along anything. And forget about traveling in any of them, except the Prowler perhaps, with its matching trailer. But again, the Prowler wasn’t a sports car, and a no self-respecting sports car would be seen pulling a trailer.

On the other hand, the Porsche Boxster has not one trunk but two. We know from experience that a trumpet case, a large sports bag with a week’s worth of clothes, an acoustic guitar and several assorted soft items will all fit in a Boxster. At the same time. With the top down.

It’s not a function of price. It’s a matter of design. And while no one expects a sports car to have the cargo capacity of a minivan, no one should expect the passenger to carry the cooler and the picnic basket in her (ok, or his) lap all the way out to the park.

Quibbles: The automatically locking doors have no unlock button. Letting in a passenger requires reaching over to the far side of the car to unlock the door, or turning off the engine so the doors will automatically unlock. The passenger can let him or herself out with the engine running only by pulling up the lock button, which is awkwardly placed above and behind his or her shoulder. Inconvenient.

The cupholders, mounted on the rear bulkhead, are useful for Cirque d’ Soliel contortionist but few others. There’s a smallish bin back there, too, good for somethings smallish if you have any.

The sunvisor are cleverly hinged at the edge of the header away from the windshield, but aren’t wide enough to be useful except when the sun is dead ahead. That’s still better than many sports cars, but it would be better yet if the sunvisors were an inch or so longer on either side.

Our test Solstice listed for $21,640, including a destination charge of $575. Options included floormats ($60), air conditioning ($960), and a power package ($625) including power door locks, keyless remote entry, power windows and power outside rearview mirrors. We’d be sorely temped to order one without any options, not for the base price of $19,420 (not including delivery), but just in the spirit of true roadsterism. Removing the carpet altogether rather than covering it up with carpeted floormats. The power stuff? Who needs it? The air conditioner? Afraid to sweat? You wanted roadster, didn’t you? Then live with the bare essentials. That’s true roadsterism.

Philbert J Thrombockle is an alter ego I used for additional data and commentary. 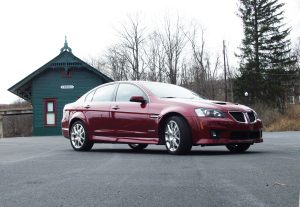 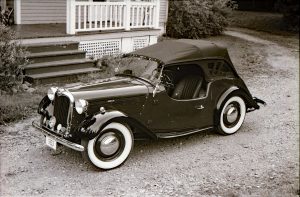 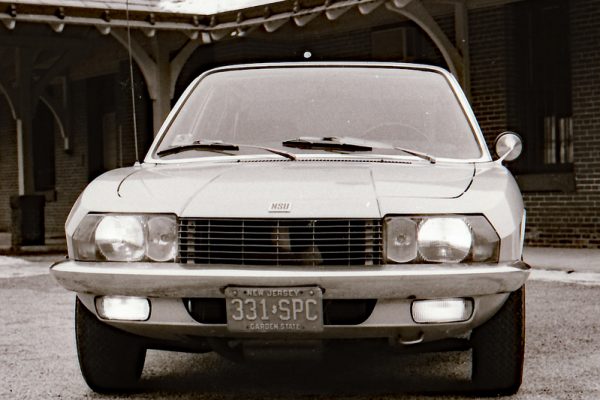 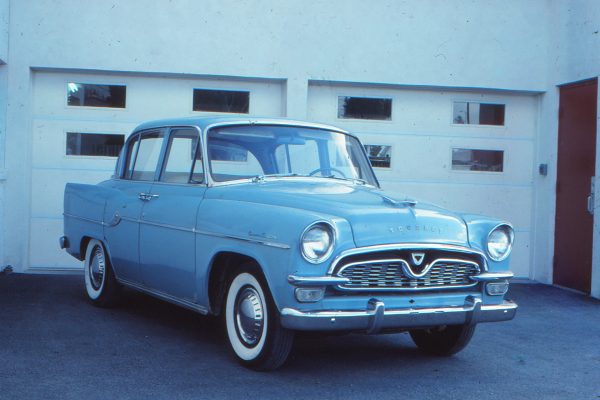 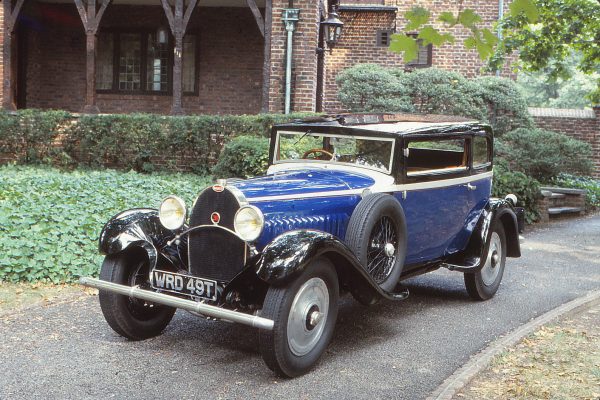