The Lola T-163 in a particularly unromantic pose...but who needs romance when you have a Can-am racer.
It's said that the car make name came from Damn Yankees: "Whatever Lola Wants, Lola Gets."
The Lola T-163 looks like what a race car is supposed to look like.
The Lola T-163, unlike later racers, has enough ground clearance top drive on the public road.
The Lola T-163 is a low ride, not a slow ride.
The Lola T-163 cockpit is a snug fit for two...or even one.
Injection stacks of the Chevy engine in Dr. Stemer's Lola T-163 are right behind the driver's left shoulder.
That's Tom Horavitch behine the wheel of the Lola T-163 out on the highway with Mel Wheeler in the funny hat scrunched down beside him.
The license plate on Dr. Stemer's Lola T163 reads "GROUP 7."

It’s madness. Adrenaline is surging like water from a big Seagraves pumper at a five-alarm fire. Scrunched into the right-hand driver’s seat, too small for me with a winter coat on, I’m blipping the throttle to keep the Chevy engine from loading up too badly in the 35-degree weather, the Webers being calibrated for more reasonable climes. The wait is interminable. The cross traffic just won’t clear.

Wozzat? Did he say traffic? He must mean traffic is so thick on the track that they won’t flag him out of the pits.

Wrong. He means traffic. As in trucks and cars in Munster, Indiana. As in Chevy station wagons from the left and Pintos from the right, all the while waiting for an opening large enough to pop the Lola through for a left-hand turn from a side street to the four-lane divided by the Jersey barriers in the middle.

The Lola. That must be a replica. Can’t be a VeeDub because he said Chevy and Webers. Maybe it’s one of them T-70 coupes built for the road.

Wrong again. It’s a genuine Can-Am car, a T-163, raced from 1969 to about 1973. Gary Wilson, as a private unsponsored entry, managed several respectable finishes with the car in 1969. Another T-163, driven by Charlie Parsons finished third in the series that year, behind the Bruce and Denny show. It was a year dominated by the orange McLaren cars, with Bruce McLaren himself first and Denis Hulme second. Wilson finished the season tied with Oscar Kovaleski at 22nd overall.

But what a show! Joe Siffert, making an exploratory expedition for Porsche, finished fourth, and Chris Amon, at the wheel of a McLaren-Chevy and a Ferrari, finished sixth. Other names: Motshenbacher, Surtees, Revson, Gurney, Andretti, Brabham, Rodriguez, Bonnier. A veritable Who Was Who in Motorsports. In horsepower, a literal cast of thousands. You could feel it at Riverside when they fired up at Mossport: Chevy, Porsche, Ford, Ferrari, Olds and Matra. More fun and noisier than an Irish wake or Polish wedding. Or both.

Only now I’m sitting in the Lola waiting for a left-hand turn. It’s late Sunday morning in mid-November in Jean Shepherd land and this Lola is sticking out in the home-from-church traffic like Dolly Parton in a fifth grade girls’ gym class. Dour-faced suburbanites in the right-turn lane glower at me: “mufflers” is only a relative term with the Lola. I stare back at them, eyeball-to-hubcap.

Finally the opening comes and I lurch across the highway. The clutch takes up easily, but the engine cleans out only reluctantly. It’s not the original all-aluminum fuel-injected big block. Rather it’s a 350 Chevy that the car’s third owner had installed along with front and rear bumpers, a windshield wiper motor, horn, turn signals, radiator cooling fans, fans to keep the fumes out of the passenger compartment and a bench seat (!) when he registered it in Illinois as a “1979 home built.” The engine was rebuilt by Tom Hortavich (who also performed all the restoration of the vehicle). It has a 0.030-inch over bore, mild track-grind Crower cam, standard head with 2.02-inch valves, four Weber carburetors on an Ingelese manifold, and a 12:1 compression ratio. In other words, except for the Webers, nothing out of the ordinary, at least from a street racer’s standpoint, and mild in terms of a real race car.

Nevertheless, the car weighs only about 1,500 pounds, and even the spitted and banged mixture that surely can’t be atomized in the cold November air can’t stop the front end from rising as I stand on it in first gear. Intermediate rain tires are mounted – slightly smaller than dry weather slicks – to the 12×15-inch front and 17×15-inch rear wheels, but the Lola still puts down more rubber than an earthquake in Indonesia. I wind higher in first and the engine gets smoother.

Redline. Shift. The Hewland LG-600 transaxle has five speeds, and the gear lever is mounted on the right bulkhead, inches from the steering wheel. First is back and to the left, and second up and to the right. The gearbox is non-synchro, but it would seem that fact could be ignored. The shifter is easily muscled into the second gear slot with a tud-tud-tud. The teeth have drawbridge gears spacing and the hardness that made Mr. Rockwell famous.

On the gas again, winding it out in second. The road ahead is clear, with the Jersey barrier on the left and no entrances from the right. The Lola – no surprise—flat halls. It accelerates at least as hard in second as it did in first, and it’s evident that were traveling quite rapidly. Of course, there is no speedometer in this racer, but I later learned the flat out in second is 90 mph (or little more than half of its maximum speed as geared). Fortunately, the brakes – big 12-inch Girling disk all around – work well, quickly hauling us down to approximately legal speeds. The noise from the semi-muffled pipes and velocity stacked carbs continue to rumble across Ohio about a half-hour later.

The ride is surprisingly good. Front suspension is by upper and lower control arms, Koni shocks and coil springs, and at the rear, the coils and Konis are located by twin radius arms, trailing links and lowered reverse A-arms. It’s all pretty standard race car stuff. But if you were expecting the Lola to ride like an overgrown go-cart, you’d be wrong. The Lola feels more like a firmly suspended grand touring car. With the dry sump race engine replaced by the oil pan-equipped street engine, ground clearance is minimal to say the least, and requires that the driver carefully plan a smooth route.

Externally, the car is similar, though not identical, to how it was raced in 1969. The wing, which we put on for our driving session, is a later addition. (Yeah, I know it has little effect on the car’s handling at highway speeds, but when you drive a Can-Am car on the street you’ve got to go all the way.) The nose had been changed by the second owner, who raced the Lola in Can-Am and assorted other races, to something of a shovel-nosed configuration, the shape and the wing hopefully to combat lift generated at speed. The nose was replaced by an original equipment-shaped piece, and the windscreen was traded for a seat that had been fabricated from molds taken from a loaned seat. It’s the little pieces that drive you crazy in a restoration project.

Riding with me has been Mel Wheeler, an old friend and my host for the weekend, and for two normal -sized people, the cockpit is not as crowded as one might expect. We’re close, to be sure, and if he moves his feet too much he’ll be working the pedals for me. But I am in no way restricted in my movements by a passenger. Of course there’s not too much to move, with steering mostly in the wrist and the seldom needed shifter on the right.

Driving the Lola on Sunday was a thrill, running it through the gears (both of them), but just as enjoyable was a non-event of the day before. We had been photographing the Lola and Dr. Stemers Excalibur SSK (more about which in a future Escape Road) and were caravaning back in, with me driving the Lola with Hortavich Jr. as passenger, Doc Stemer alone in his Excalibur, and Mel and Hortavich Senior in Dr. Stemers ‘64 Corvette. On the way, we were stopped by red light, and who should pull up in the right lane beside me but Wheeler in the Vette.

Well, I don’t know what you drove when you were in high school, but for Wheeler and me, it was equipment far less potent than what we were in right then. But we did have our dreams. And verily it seemed that one of them had come true. Two hot rides and a red light.

I looked at him and he looked me.

I nodded and he nodded.

The light turned green and well…no, we didn’t have the race that would have been legend in Muenster, Indiana. We motored off sedately in a way that would have made every Chevy wagon driver in Muenster proud. But the fact is we could have, and sometimes that’s enough. Just because it could is why this Lola’s on the street.

I’ve wondered over the decades since what would have happened should the local constabulary have noticed and taken exception to my youthful tomfoolery of that day. We’ll never know, of course, but certainly the statute of limitations has expired. 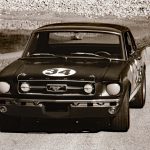 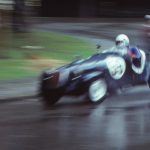 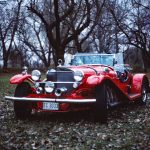 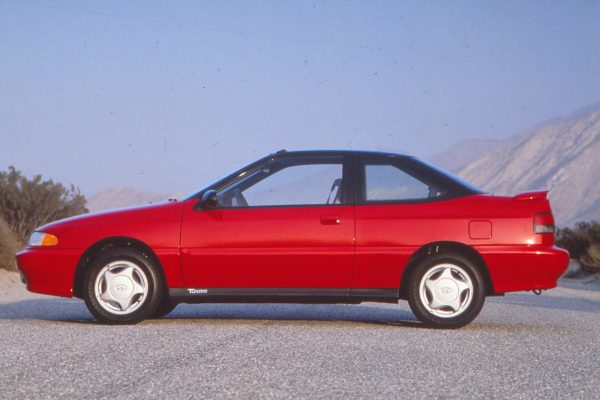 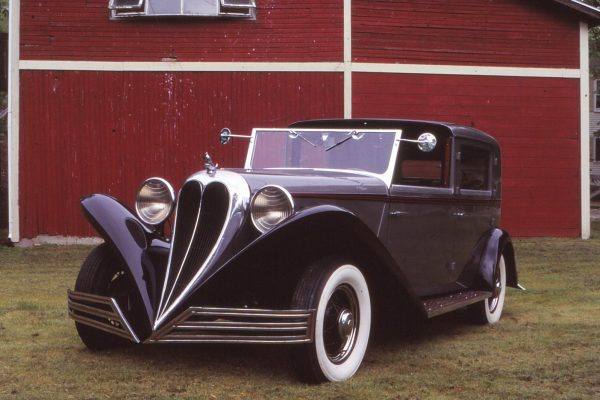